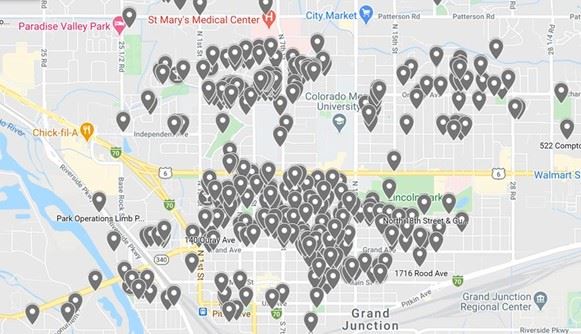 On Oct. 25, 2020, the City of Grand Junction experienced an early-season winter storm that caused extensive damage to the City’s urban tree canopy. Snow collected on mature trees limbs that had not yet dropped their leaves, which led to massive amounts of limb damage.   The event was unprecedented.

The City responded quickly to this damage the evening of the storm and the large majority of the restoration work and clean up occurred within two weeks of the storm. The City’s response effort included over 30 City staff and three licensed tree contractors. Specialty equipment such as grapple trucks and chippers were used to pick up large piles of logs and to dispose of branches to convert to mulch. The response effort minimized the risk of fallen tree limbs that threatened the safety of the public and property. Without the support of additional City staff and the private contractors, the clean-up process would have taken much longer to complete.

The City responded to over 550 calls and work orders related to the damage to trees in parks and street trees. Work orders required maintenance action to damaged trees that endangered public spaces, the sites of which are reflected in the map above. Immediately following the winter storm, staff received nearly three calls per minute requesting help. The response included a total of 1,400 total labor hours of city staff response time and 600 total labor hours of contractor time. The types of tree damage that crews responded to included hanging mature limbs, which posed a threat to public safety and property, and fallen limbs that blocked sidewalks, driveways, and roadways. The majority individual work orders required specialized equipment and a skilled arborist to safely remove these limbs while still protecting the health of the tree. Over 20 locations involved critical street closures where large limb failures blocked streets. The City wants to thank the staff and contractors who were involved in this large-scale effort for their dedication and hard work in performing a significant public service.