Champion of the Arts Award 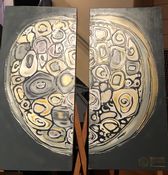 Annual Champion of the Arts Is Accepting Nominations

Cultural groups, organizations, and local citizens nominate Grand Junction businesses and individuals for this honor to recognize their generosity, dedication, promotion, and support of the arts, and the award winners are selected by the Commission on Arts and Culture. The awards to these recipients are artwork by local artists.

In the fall of each year, the Commission on Arts and Culture invites nominations for the two annual Champion of the Arts Awards. The awards are given to one Grand Junction business (located within the city limits) or organization, and one individual who/that epitomizes leadership, generosity, and dedication towards arts and culture. The selection criteria are:

The Arts Commission will purchase 2 original works of art and present them as the awards for Champion of the Arts. Submissions will be considered until November 5, 2021 by 12:00pm.

Congratulations to the 2019 Champion of the Arts Award Winner

Each year, the Commission on Arts and Culture invites nominations for the annual Champion of the Arts awards. This year, two individuals were selected because of their leadership, generosity, and dedication to arts and culture, and were recognized at The Grand Junction Centennial Band's Christmas Concert at The Avalon Theatre.

The recipient of this year's award was nominated by Gary Hauschultz, a local artist, along with 12 other artists who were involved with the 2019 Art on the Corner program. This individual works at a company that has been voluntarily involved with Grand Junction's Art on the Corner program (AOTC) for 23 years, and he himself for 19 years. In 1996, the company was approached to borrow a piece of equipment to set a sculpture. They don't loan out equipment so instead they volunteered to help set that piece, and that was the beginning of their commitment to this program.

Every year, 8 to 12 employees organized by this individual, appear before sunrise and work until the last sculpture is welded or bolted into place. This year that was a total of 31 sculptures! They provide all of the necessary equipment, professionalism and skill to precisely execute the removal and installation of the AOTC temporary exhibit. According to Tina Ross, AOTC coordinator, "The overwhelming support and knowledge of each volunteer from this company is critical for the success of the AOTC installation every year. The physical and mechanical requirements brought by the volunteers to place the sculptures is rarely considered by the viewer. However, these behind the scenes heroes help make this all possible."

All of the artists that participate in AOTC, some new, some for years, recognize the amazing skills, dedication and talent of this crew to safely remove and set sculptures. The many quotes from participating artist echo this one from Kyle Ocean of Fort Collins who says," The installation process in Grand Junction for AOTC is a breath of fresh air in the public art realm. The team is experienced in every aspect of installing public projects and has an answer to every hurdle you can throw their direction. They are efficient and extremely helpful, well prepared with tools and power options, and it make the install incredibly easy and stress free. I look forward to my trips to Grand Junction in the fall and could not have higher regard for the team and program that make up Grand Junction's Art on the Corner."

Congratulations to the following local artists whose artwork was purchased as the awards:

Past Champion of the Arts Award Winners