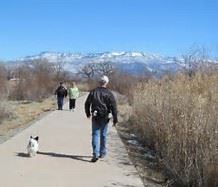 The seven to nine members are appointed by the City Council. Terms are for three years and end in June.

The purpose of the Urban Trails Committee is to plan and promote the City Council's goals for an interconnected network of sidewalks, paths, and routes for active transportation and recreation throughout the Grand Junction urbanized area. The Urban Trails Committee acts in an advisory capacity to the Grand Junction City Council on matters pertaining to the safe, convenient, and efficient movement of pedestrians and bicyclists of all ages and abilities through the community, as well as other forms of transit.

The Urban Trails Committee (UTC) envisions Grand Junction as a vibrant walkable and bikeable community for all ages and abilities. The convenience, efficiency, and safety of our active transportation network will be an attraction to everyone who lives here or comes to visit.

The Grand Junction Trails Board was created in 1994 to serve as the principal coordinating body for the development of trails and pathway system throughout Grand Junction and connecting to trail systems outside the City; to plan, develop and promote such a path system and help coordinate the implementation of the Multi-Modal Plan; and to actively pursue the development of new trails both in the City and in areas which may be annexed.

Since 1994, the UTC has participated in transportation planning through the Regional Transportation Planning Office (RTPO), including all modes, and review of development projects, as well as promoting safe and efficient active transportation through a number of programs and projects. With the City's new focus on Safe Routes to School projects and other bicycles/pedestrian planning efforts in 2014, the Council requested that UTC be a committee of the City rather than a subcommittee of the Riverfront Commission. Resolution Number 48-14 was adopted by the Grand Junction City Council on December 17, 2014, re-establishing the Urban Trails Committee and adopting Bylaws.