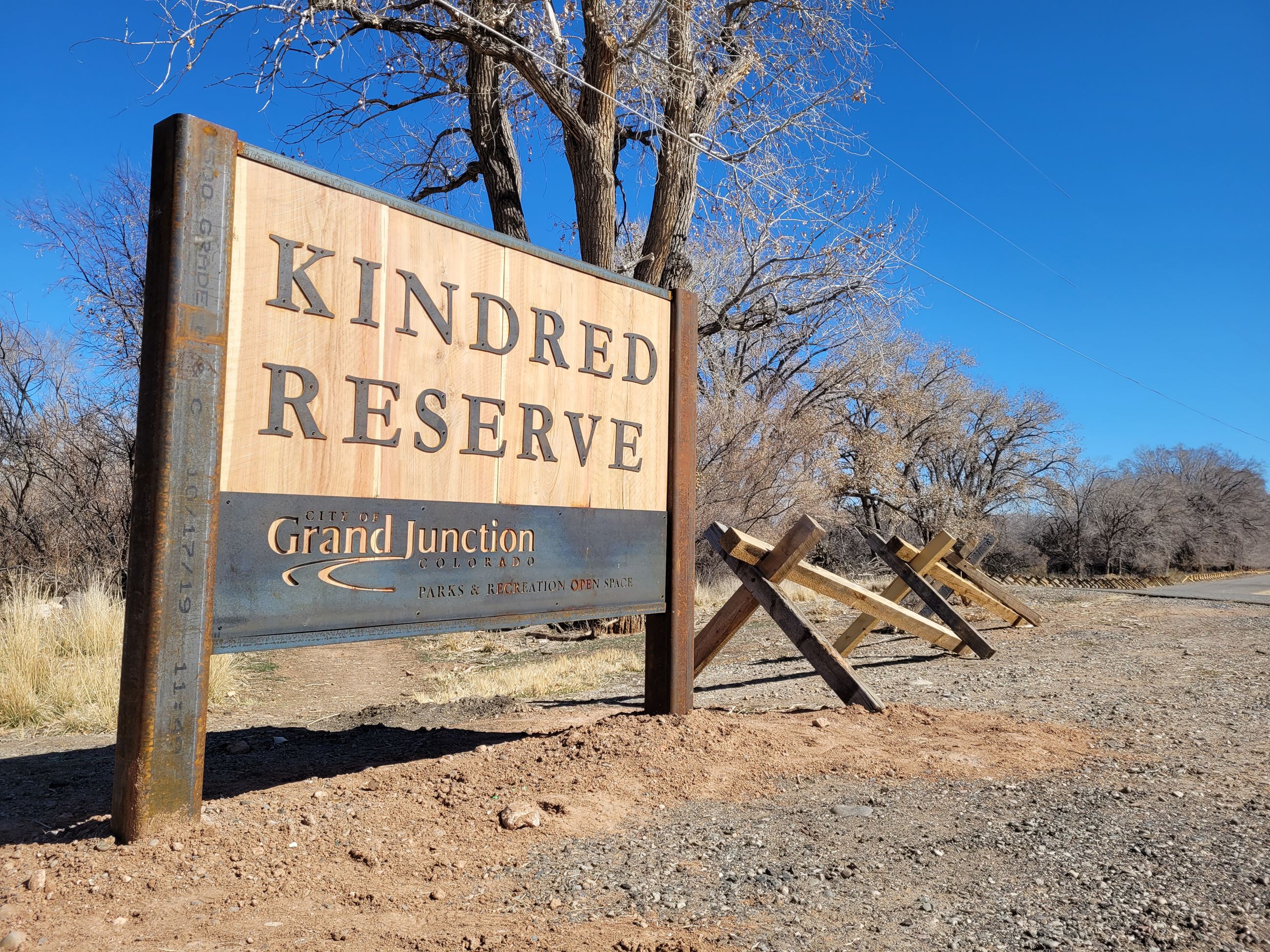 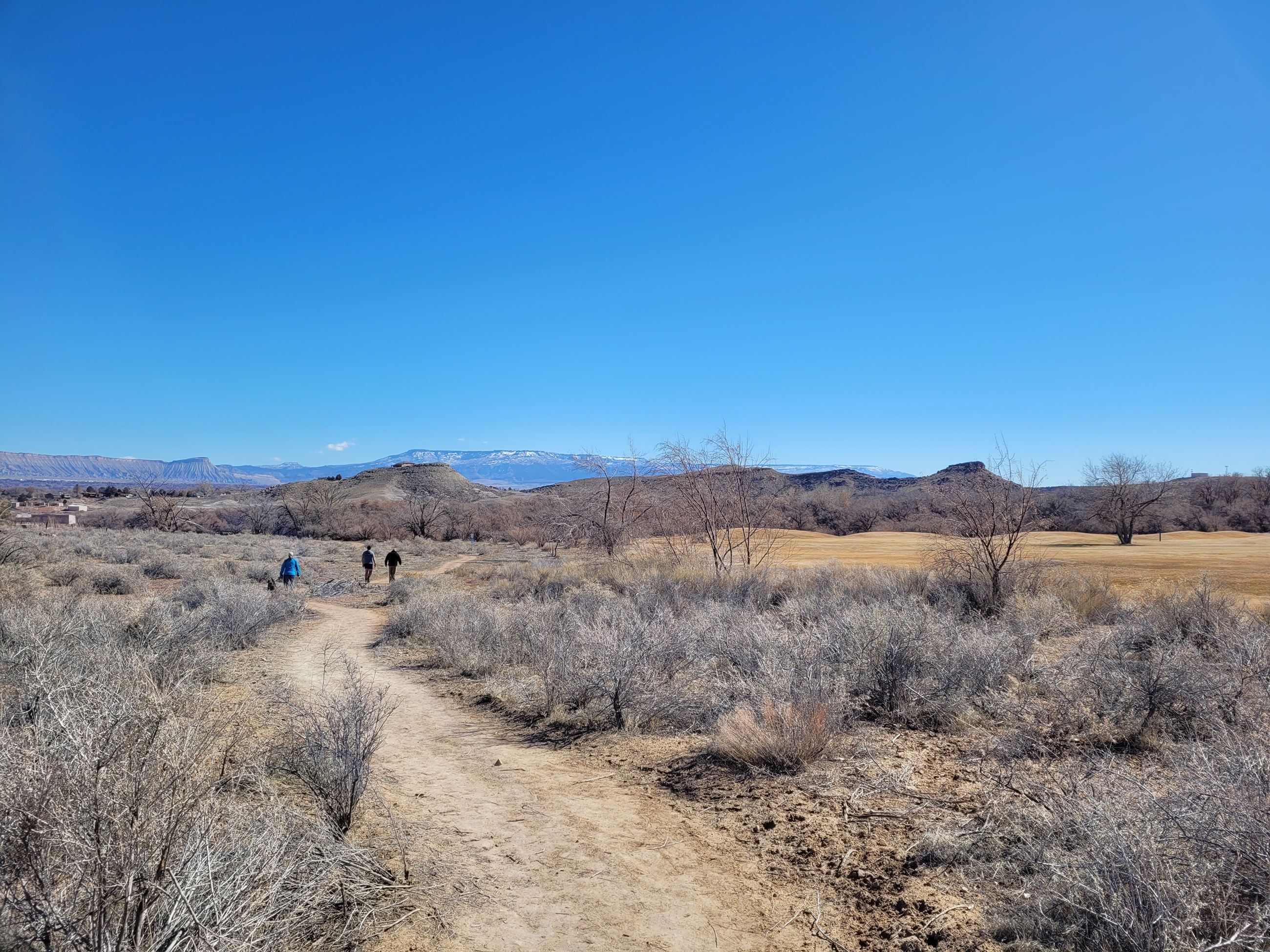 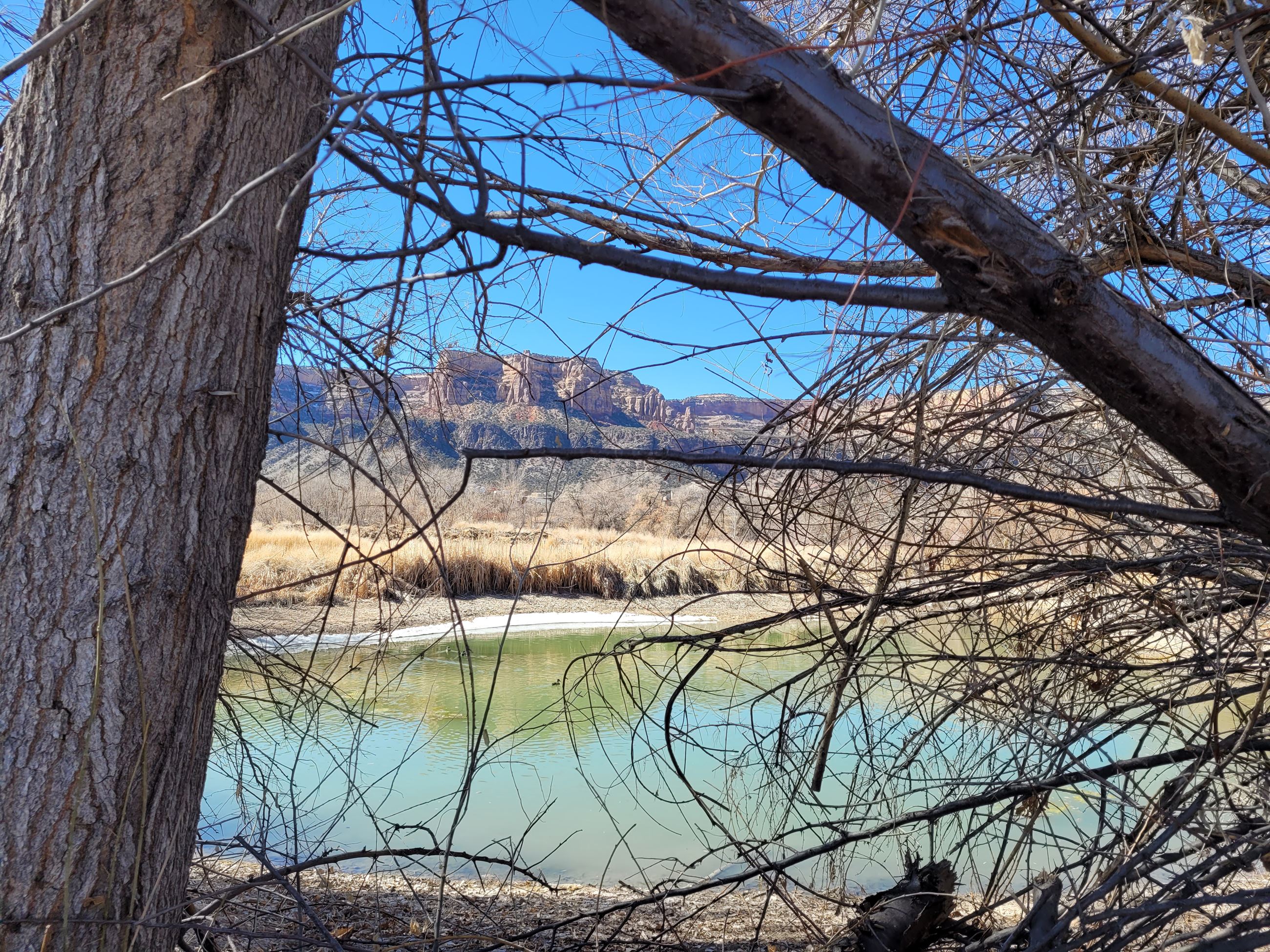 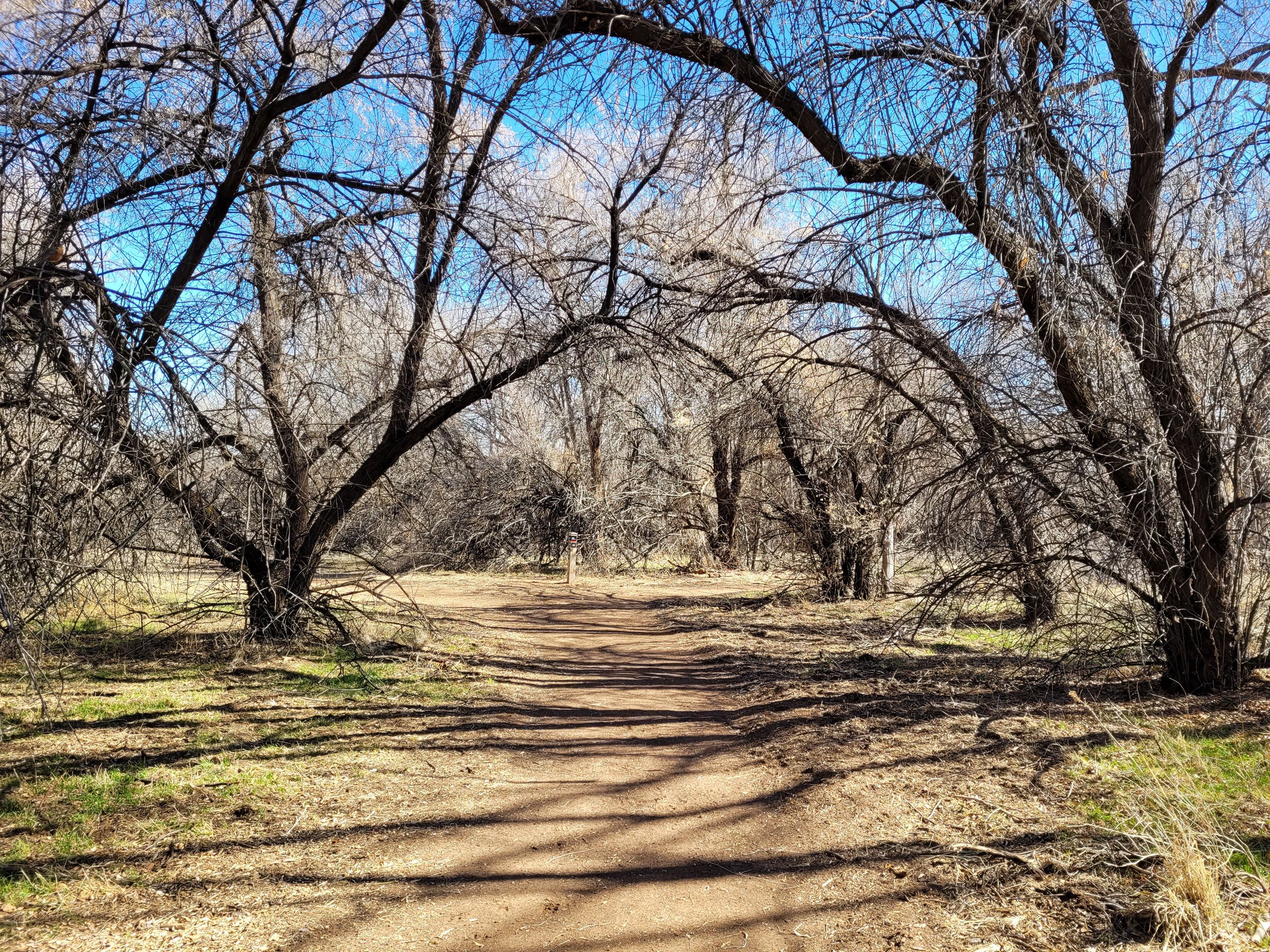 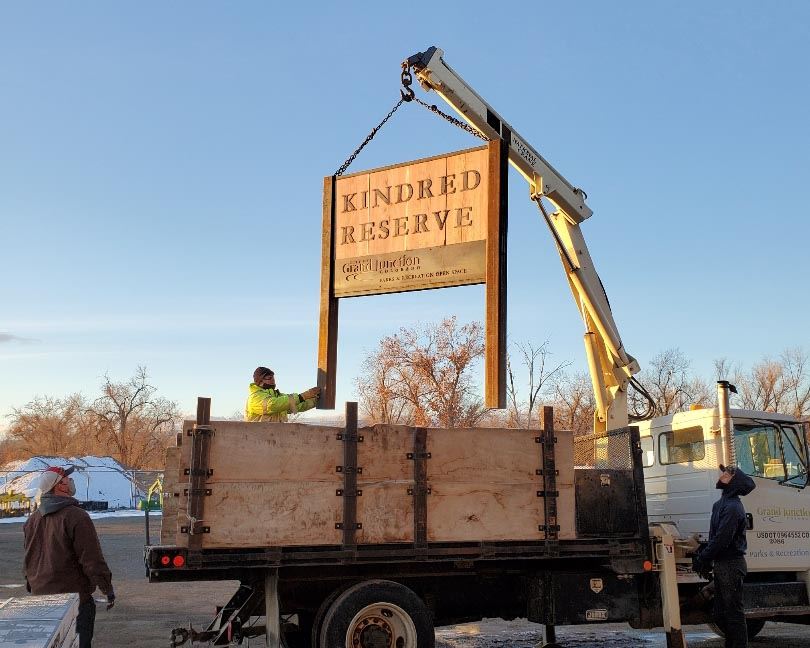 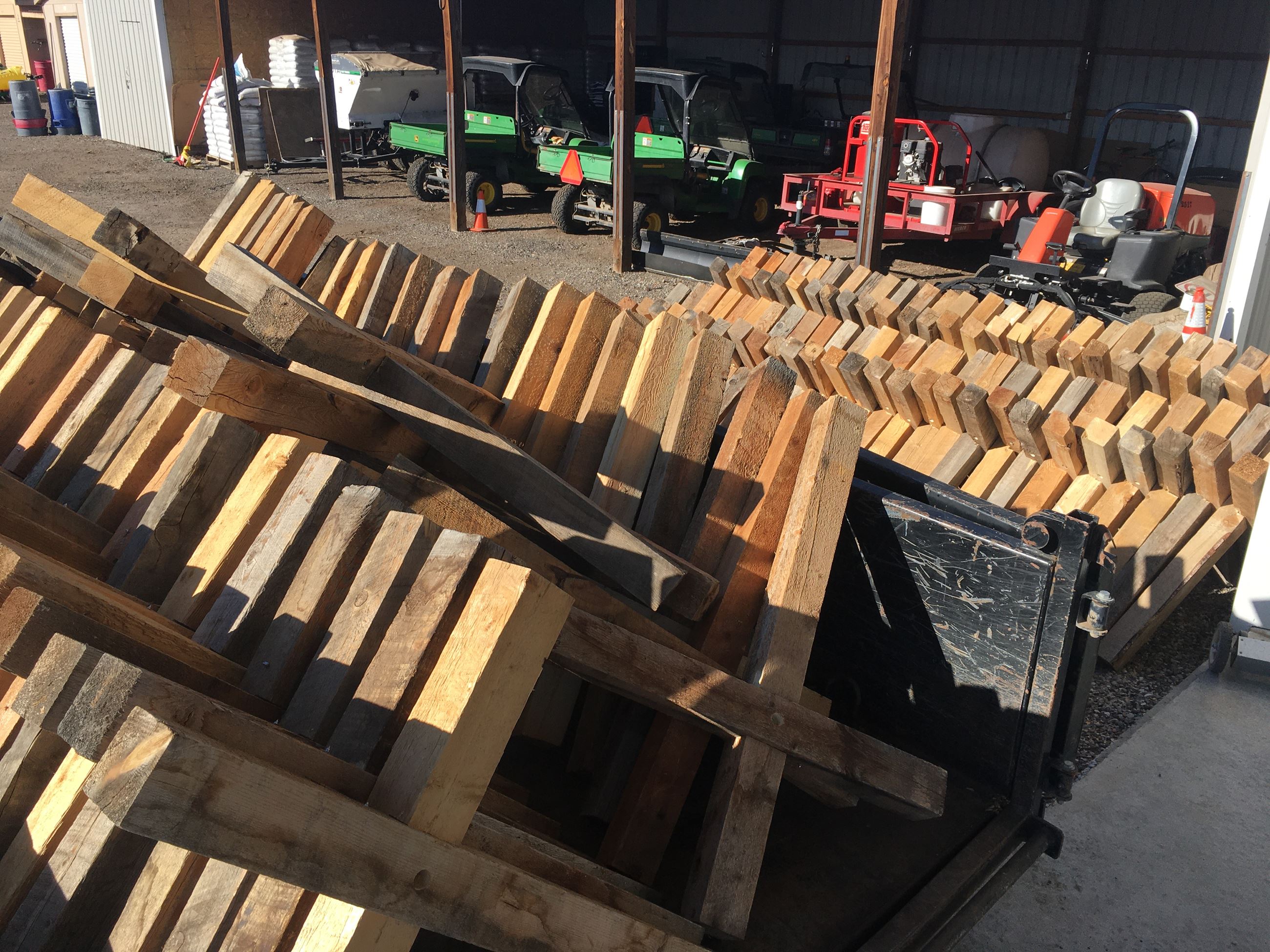 Kindred Reserve, located at 2064 S. Broadway, is Grand Junction’s first open space park. This park is 37-acres and has a natural feel with 1.75-miles of dirt trails, views of the Colorado National Monument, Book Cliffs, and the Grand Mesa. The park is a unique location for users to enjoy walking, running, bird watching, and being out in nature surrounded by wildlife. Not only is this space an exceptional addition to the City’s parks system, but the background of how Kindred Reserve was created is a unique story that helped strengthen the Grand Junction community. From zoning of the property to community input, in-house design, and development through the COVID-19 pandemic, Kindred Reserve is the product of community, innovation, and collaboration.

History of the Property

The Kindred Reserve property has been owned by the City since 1995. With the property so close to the Tiara Rado Golf Course, the land’s initial use was intended for a driving range and practice area. However, with golf’s popularity and participation on the rise, the remainder of the 80-acre parcel was slated for an additional nine holes, which would have made Tiara Rado a 27 hole golf facility. As time went on, golf participation stabilized and several new golf courses were developed in the area and region creating a surplus of golf holes and correspondingly, the need for an additional nine holes at Tara Rado became impractical.

The property is rich with wildlife and dense vegetation and the preservation of this ecosystem was important to the City. This posed some challenges on how to develop the property for residents to enjoy while preserving wildlife at the same time. The idea of an open space park came into fruition when Parks and Recreation Superintendent, Randy Coleman, and Forestry and Open Space Supervisor, Rob Davis, walked the property to see how this land could be properly utilized. Grand Junction lacked areas of natural space within City limits, but this property had the potential to close that gap and offer a tremendously unique amenity. The dense vegetation and mature trees, along with the presence of wildlife, creates the feeling of being in the woods, all within just a few minutes of town.

Community input for this development was a vital step for the City of Grand Junction. Understanding the needs and wants of residents ultimately steered the blueprints for Kindred Reserve. Before the pandemic, the City would host in-person meetings with community members regarding different developments. With the pandemic at its peak in Mesa County, the City utilized online engagement platforms to ensure residents still had the opportunity to provide input on City plans. Through the platform GJSpeaks.org, the City can publish live or pre-recorded presentations and upload documents related to the topic at hand. Residents can then access GJSpeaks at any time, review the deliverables, and leave feedback directly on the site. A presentation on Kindred Reserve was shared on GJSpeaks and to help share this information with residents, over 300 mailers were mailed to residents within a half-mile radius of the property. The mailer asked residents to visit GJSpeaks and leave their input. The project page was viewed over 100 times and 38 residents provided written feedback. This feedback was implemented into the designs of Kindred Reserve including the parking lot’s location. To create a buffer for nearby residents, the parking lot was moved west and unique fencing was installed to create a visually striking barrier from Desert Hills Road and the adjacent neighborhood. This evolution was a direct result of the successful public engagement effort.

The Development of Kindred Reserve

The name Kindred Reserve was chosen for its meaning and representation of the park. The word Kindred has strong ties to family, kin, tribe, or clan. The word reserve in this context is tied to the idea of a natural space that is full of kindred spirit, or family.

During the COVID-19 pandemic, Grand Junction experienced a 105% increase in park visitation when compared to before the start of the pandemic (Google COVID-19 Community Mobility Report). With a concept already defined for the Tiara Rado property, the City of Grand Junction saw the opportunity to develop the open space park. The development of Kindred Reserve was done in-house by City employees and was complete within a short time frame of three months. In October 2020, crews began the process of building the 1.75-miles of soft-surface trails. Crews had to cut through thick vegetation to define how the trail system would be laid out. Once defined, crews started to outline the trails. To help preserve wildlife, the northeast corner of the property was untouched, and the trail system was kept natural.

Not only was the construction of the property done in-house but the design for the signage and fencing posted around the property was as well. The signage is a custom-made; in-house design made from a declined park Honeylocust Tree that was removed for safety. The 1,700-feet of fencing on the southern border of the property was designed, produced, and installed in-house as well. The fencing has a unique style to fit the overall feel of the open space park.  The department plans to use this distinctive fencing at future open space properties from declining trees that have to be removed from the urban tree canopy. This amazingly unique public open space showcases the skills of City staff in creating amenities like this at a low cost.

The Future of Kindred Reserve

The City of Grand Junction hopes to improve Kindred Reserve even more over time. A future project includes creating additional signage to better identify wildlife and educate users about the space. Improvements will help strengthen the tie between wildlife preservation and community.